So a confession: There were times when I did not behave as a good student.

Spanish class was one of those times.

I was horrible in Spanish class.  From the day I stood in the door of the classroom, to the day I vowed never to take another course from that teacher, I was just an absolutely plain awful student.

Let me back up and explain that this was a difficult time for me.  My dad’s career transferred us from New Jersey to Ohio.

I was a junior in high school, moving away from all of my friends, my networks, my favorite mall (this is important to a teenager) to a town I didn’t understand.  I went from being a Fighting Eagle to a Fighting Quaker (yes, frighteningly enough, this is a real mascot – an oxymoron in itself).  Did I mention that I was a junior?  In high school?

As a new student, I got the thrill of being escorted around the building by the wind-pant wearing, whistle-swinging P.E. teacher.  He led me through the building with an editorial about many different things: who not to hang out with, what not to eat in the cafeteria and where not to sit at the stadium.  He also introduced me to all of my teachers – as they were in the middle of teaching their first period classes.  It was quite embarrassing, if I do say so myself.

He directed me into the Spanish classroom, and I stopped dead in my tracks.  The class was being taught by the wife in The Shining with a pyramid haircut.

I had a flash to being snowed in the high school and this teacher screaming as her students shouted “Red Rum, Red Rum!”  I could not step any further into the door.  This did not bode well for the gym teacher who proceeded to push me as if I was on the defensive line through the doorway.

Mrs. S. looked at me inquisitively, introduced herself and was very nice that day.  It was the first and last time that would happen.

I was awful in her class.  First, I was placed in the back of the room.  This is not a good place for me – especially in a class that was Greek to me, oops, I mean Spanish.  I would try listening to her, I really would, but I couldn’t get the vision of her fighting off Jack Nicholson’s character out of my mind.  The same actress also starred in Popeye – as Olive Oil – so it was Shining or Olive Oil, all day, every day.  Also, Mrs. S. talked like she was eating her face.  It was very disturbing.

After awhile, I began to read in class.  Novels, not Spanish.  This is when Mrs. S. caught on to my less-than-stellar performance as a student.  She began taking away the precious novels I would be reading in class.  I switched to magazines.  She figured that out, too.  Darn.

Crazy Pat went in for the conference.  She came home, spread out 12 novels and 16 magazines on the kitchen table.

She told me she believed that I was not acting appropriately, and there was a personality conflict because of it.  She said I needed to apologize the Mrs. S. and start paying attention.

I started paying attention.  But I never apologized.

I felt badly for my behavior as a 16-year-old.  To Mrs. S., I am truly sorry for my poor behavior.  The old saying is true: what comes around goes around.  And it has come full circle now that I am a teacher.  Oh, and one more thing, thanks for giving my novels and magazines to my mom.   I really appreciated it.  Oh, and, sorry for being just plain awful.  OK?  Thanks. 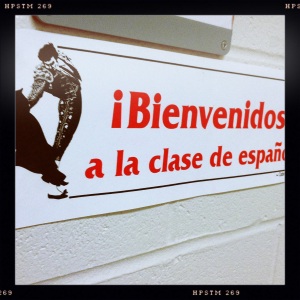 24 thoughts on “The Spanish Inquisition”