Friday Night Lights takes on an entire new meaning in my neck of the woods.  I have really never seen anything like it until I moved to this area when I was a junior in high school.  I was completely overwhelmed how an entire high school could, basically, suspend all learning to be athletic supporters (pun intended).  By mid-week, all the hallways were elaborately decorated (students were in and out of classes to do so), students were dressed in daily themes (pajama day, hat day, hippie day – some kids took this one a little too far) and pretty much, the school itself was in a constant state of chaos that all led up to Friday’s end of the school day pep rally and The Big Game. This was my perception as a junior in high school.

Seeing the rivalry as an adult has taken on a whole other dimension for me – one that is almost worse than in my high school days.  At the start of September, before the school year is even in full swing, papers begin to trickle home. “Go Team, Beat the Other Team” t-shirt sales, stickers, information regarding The Big Game and spirit week and community pep rally events. And so it goes.  I have two dudes who both want the “latest and greatest limited edition” t-shirt design created specifically for The Big Game.  There are “all-calls” from the schools about the community bonfire, ticket sales and even spirit day themes.

There was also community outrage about the town’s trick or treat schedule because it conflicted with the scheduled community bonfire/pep rally. Many wrote letters to the editor.  Many complained about it on social media. Many are just plain crazy.

The rivalry may seem a little bit out of control.

This spring, some seniors from my town decided to paint the windows of their Big Game rival school with window paint – less than two weeks before graduation. Unbeknownst to them, the rival school had their windows treated with special UV decals to help keep the rooms cooler.  The window paint ruined the window treatments, costing thousands and thousands of dollars in damage.

Amazingly enough, no one said anything about how this zillion year old rivalry might have affected their judgment. And no one pointed out the fact that they have been raised on this rivalry, so of course they might make a bad decision based on the craziness of The Big Game.  No one mentioned that since the tender age of kindergarten, these students had been going to the community pep rallies and bonfires and dressing up for spirit week and buying the latest, limited-edition Big Game t-shirt.  No one mentioned any of this.  Instead, they wanted these students to miss graduation. Unreal.

Now, I don’t condone their behavior. I would be livid if it was my child, but I do think the issue is more than just a few seniors vandalizing property.  I firmly believe that the rivalry is so ingrained in them they can’t see the forest for the trees. The seniors mentioned above did get to graduate – and walk at graduation to the dismay of some. However, they lost out on some other rights of passage like Senior Day.  And respect.  They were required to perform many hours of community service and make restitution for the ruined windows.  Many people – in both towns – felt this was not enough.  They felt these seniors deserved the book thrown at them.

So, what am I going to do as a parent to help my dudes put the rivalry in perspective?  I am going to start by skipping The Big Game tonight.  We are going to visit with friends and talk about other things.  We may even play board games, like Life, Sorry and The Game of Things – a big favorite around these parts.

I guess it will be The Big Game with us tonight, without the limited-edition t-shirts.  Monopoly, anyone?

About a month ago wrapped up the 10th musical The Captain has directed at his high school.  It is also the 10th high school musical I have choreographed alongside him.  I felt this decade of musicals was a big deal, and so on closing night, the cast called him up on the stage, said a few words about the big “10” and gave him an amazing bouquet of balloons and flowers.

He was mortified but was OK with it in the end.  The Captain is very modest about his successes.  He actually turned a few shades of tomato.  Mission accomplished.

When The Captain took over the theater program over 10 years ago, it was following a director who was a legend at the school.  Kids can sometimes be strange (imagine that!), and they were none too accepting of “the new guy.”  It took time, but he made it.  And 10 musicals later, he really made it.  I believe this is a milestone that doesn’t occur often, so balloons, flowers and adequate blushing were required.

Being a director is extremely time-consuming.  We had both of our dudes during  the 10 years.  String Bean was just an  infant during the production time of the first musical.  I would wear him in a Baby Bjorn while I choreographed the dances.  Squishy came along four years later, just in time for me to demonstrate dance techniques a la Kevin Bacon.  I rode the ride alongside The Captain during the journey, filled with ups and downs,  crazy teenagers, overly involved parents and a fickle administration.  Ten spring musicals.

Here they are in order:

I am proud of The Captain and the almost perfect 10 shows.  I say almost perfect because some of them were bumpy rides.  In Footloose, he cast a brother and sister to play the parents of the wild and strong-willed Ariel.  The brother and sister sinister duo teamed up on him and attacked him on a social media website.  Anonymously, of course.  But, besides that little snafu in year four, it was almost smooth sailing.

The conclusion of the tenth musical.

So, in the words of Joseph, “Any dream will do,”  but three standing ovations also work.

Each and every year, I embark on a perilous journey.  One that defies all things known and makes the impossible possible.  One that is a black hole with a narrow escape.  One that encompasses magical powers beyond the scope of nature.  What is this odyssey?  Why, it is taking students on field trips to see a Shakespeare play.

This year, I enlisted the help of my trusted friend and confidant Suz.  She and I gathered all of the courage and tenacity we could muster to organize this massive undertaking.  She is the reason I made it through the day.

Let me back up in time and explain the path of the most recent journey we were destined to travel.  It was year 2002, and I was summoned to a grand place in the land of Cleveland known only as The Great Lakes Theater Festival.  From this moment on, I was entranced by their powers.  Enamored by their gently use of The Bard’s great words.  Encased in their sheer talents.  I was, to put it mildly, hooked.  As Juliet would say, “This bud of love, by summer’s ripening breath, May prove a beauteous flower when next we meet.”  Yes, indeed.

From then on, I took students to see these incredible works of art each year.  It was a time to develop young minds, and show (not tell) them how important and timeless the plays of Shakespeare really were.  It was mystical.

But not always.  Many times there were alien students among us.  One particular one did the worst thing possible – he tripped an actor.  According to E.T., his legs needed “extra room” so he put them in the aisle.  Bad, bad alien student.  Another Alf-like creature listened to his iPod through Act I, Scene II of A Midsummer Night’s Dream.  His excuse?  “I don’t understand what they are saying.”  My response, “We covered it in class.”  One Mork actually fell into a deep slumber during Twelfth Night.   His rebuttal after other students woke him up with furious tapping and shaking?  “The girl is dressed like a guy and it creeped me out.”  Classy.  These are the villains of my days with The Bard.

But, alas, I have held true to my word and provided the non-alien youth with the best gift of all: the gift of live theater. 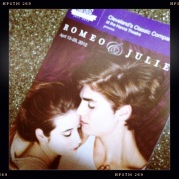 This year’s presentation was Romeo and Juliet.  I was ecstatic for a few reasons.  First, this is actually one in our literature books, and second, I teach it every year.  Double score!  We both got crazy-eyed with happy thoughts and reserved not the usual 40 tickets, but a whopping 80 tickets with visions of Romeo dancing in our heads.

Yikes.  But we had high hopes. Maybe too high as Mercutio states, “True, I talk of dreams, which are the children of an idle brain, begot of nothing by vain fantasy.”

Let me just state that, for the days approaching the trip, it was as if “the mad blood stirring” was a reality.  Everything that could go wrong, went wrong.

Finally the big day arrived.  We herded 80 students into two school buses at the blistering early time of 7:35 a.m.  We ventured on the hour and a half bus ride to Cleveland.  We gathered all of the students and promptly got them seated in the theater.  We smiled as we sat down in our seats, breathing a collective sigh of relief.

The set. Taken without a flash before the show began.

Intermission came.  Our students deserved halos for their amazing behavior during the first half of the performance.  Brainvomit40 looked at her watch: 11:39.  The buses had to be back by 2:25 for their routes.  Would the show be finished and we be out the door before 1 p.m.?  Enter nail biting.

Throughout the second half (and I must say half, it was technically Acts III, IV, V), I couldn’t focus.  All I could think about was what was coming next.  Here is a look into my mind:

“OK.  She is getting the sleeping potion.  Finally.  Good.  Now she is going to have a monologue and drink it.  Fine.  Now Romeo is going to find out she died.  OK.  We’re good on time.  Crap.  Romeo still has to fight and kill Paris and there is dialogue.  Darn.  OK, he took care of Paris.  Now the death scene.  Geez.  Totally blanked that the Friar’s so many lines here.  Come on already and bring out the Prince to wrap this up!”

By this time, I have no nails left to speak of.  I would be lying if I didn’t confess that we were about to cheer when Juliet said, “O happy dagger!”

The play ended, and we made it on the buses by 1:06.  We made it back to the school by 2:22.  Whew.  I should have been feeling down because it was over, “Parting is such sweet sorrow,” but instead I was thinking thank goodness this is once a year.

I still love the Bard, and I appreciate the opportunity to showcase how incredible his words come alive in a live performance.  “My bounty is as boundless as the sea, My love as deep; the more I give to thee, The more I have, for both are infinite.”

Here is another post I wrote about the Bard.  Enjoy!