What Pooh Are You?  This question was posed to brainvomit40 and I during the school day last week.  I was going on and on about a certain student acting like Eeyore, and Suz was talking about one who was like Pooh.  It was a perfect question and ideal for a manic Monday’s blog entry. 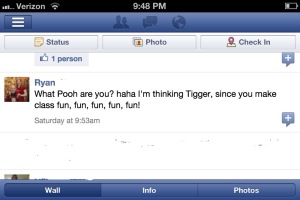 Over the weekend, it was posted on my Facebook saying that I would be Tigger.  OK, I thought, I can handle Tigger.  Tigger is cute – he has stripes, he’s a tiger, he is bouncy.  I am sure that sometimes I really could be a little like Tigger.  Bounce, bounce, bounce.

But the real question is, what Pooh are you?  High school students can easily be put into Pooh categories.  As I mentioned earlier, I have an Eeyore, but I also have all of the other Pooh characters as students.  There is always at least one of each of Christopher Robin’s friends every school year.

I have an Eeyore during my first period class.  In their mind, nothing goes well for them.  The Eeyores never have a good day, and are frequently seen visiting the counseling office because they can’t find their tail.  Again. The Eeyores mumble, and physically show their feelings.  When disciplining an Eeyore, it may require chocolate or some other incentive so they don’t droop down to the floor and give up all hope.

I have a Rabbit.  He knows all and doesn’t hesitate to share it with everyone.  He firmly believes he is smarter than everyone around him – including me.  He, however, does not want people to think he is pushy or a know-it-all and will defend, defend, defend until the cows (or his Pooh friends) come home.

I have a Piglet.  This is a student who gets very excited, eager, basically thrilled about everything.  They have a thousand questions, always needing constant reinforcement and encouragement. Yet, this student is timid with the Rabbit and doesn’t understand the Eeyore.  This student will not voice how very excited, eager, basically thrilled he is because that is not in his nature.  He is a usually a sweetheart.

I have an Owl.  Owls are special because they always know the right thing to say at the right time.  Sometimes, the owls keep talking and don’t know when to stop.  This student will speak until they realize their audience is totally gone.  Then, they will fluff their wings and move on to another group.  The owl is friends with many, however many stop listening soon after the owl starts talking.

I have many Kangas.  This student is the mommy figure who takes some of the Poohs, Eeyores, Piglets and Tiggers under their wings (or in their pouch).  Kangas are special because they are not afraid of the Rabbits and will basically stick up for all of the characters, not just the ones they hold closest to their chests.

I have some Roos.  Roo is a cute little guy who will always want to play.  Roo students are easily distracted and can run with the Tiggers of the world.  Roos also get along with Rabbit, which says a lot considering the Rabbit students are, well, you know, bossy!

I have a Tigger (and apparently I am a Tigger according to our school counselor who knows best).  Tiggers have tons of energy and want to make people feel happy.  They are confident, “The wonderful thing about Tiggers is that Tiggers are a wonderful thing.”  They are proud to be their own person.  They may be entirely too enthusiastic for some.  Like my former boss, for example.

I have a Pooh.  The curious student, who really is concerned with the simple things like, “When is lunch?” or “Do you think we will have a snow day tomorrow?”  Pooh always has random questions that come out of left field.  The Poohs are always thinking about something simple.  Like how many minutes until the bell rings.

So, what Pooh are you? 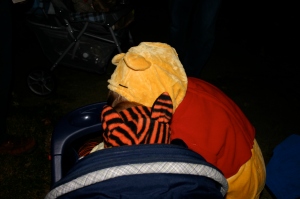 My own Tigger and Pooh.